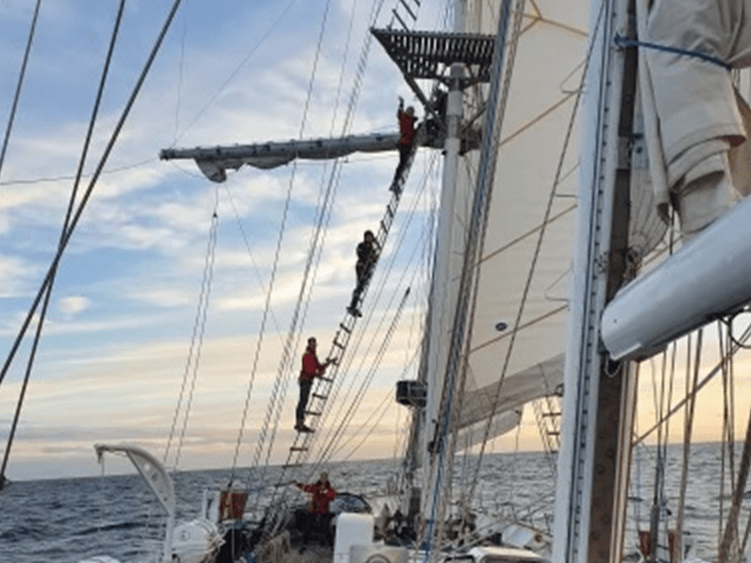 Welcome to Day 3 of our voyage. During the early hours of this morning we rounded Tasmania’s South West Cape in reasonably good sailing conditions (the Youth Crew may say rough). We managed to reach the spectacular Port Davy by late afternoon and have anchored in the sheltered Bramble cove where we will remain overnight, ensuring that our crew are well rested for the days ahead.

Weather permitting we will get ashore tomorrow so that we can hike up to the peak above Bramble Cove for a good view of most of Port Davy and the Bathurst Channel. Doing a wonderful job of writing tonight’s Captains Log is Niamh and Sophia from White and Blue Watch, please enjoy.

Until tomorrow, take care
Yours Aye

Greetings to all shipmates, armchair sailors and blue-water enthusiasts. Day Three was a bit of a rocky start, with most of the youth crew looking a bit greener around the gills and emptier in the bellies following our first overnight watches. Our wake up song, “Red Watch, red watch, what you gonna do?” was excellently composed and performed by the Radical Red Watch, and we’re keen to see what other watches come up with.

We started the day with another round of Chef Jarod’s excellent breakfasts (thanks to Willy G and Jo for cooking up a storm!), before continuing our watches. We were lucky enough to have a couple of playful seals follow the ship for a while, as well as to spot some majestic albatrosses coast above the waves. We’re still holding out hope for a couple of dolphins, and if we get really lucky, maybe a whale or two.

Following lunch, we quickly shifted to tacking stations for rotational tacking exercises, as well as the furling and setting of the headsails and ‘tween mast staysails—and now we’re really beginning to get the hang of sailing this beautiful ship!

Having left Quarantine Bay far behind, we continued our passage around the Southern tip of Tasmania towards our overnight anchorage. Port Davey is one of the most remote and beautiful places in the world, and we’re super excited to be heading there. Several of the youth crew were also tasked with climbing aloft to tie the gaskets on both the foremast and mainmast, which we quickly found was a lot more difficult when under sail!

We arrived in Port Davey late in the afternoon, and everybody got to take advantage of the beautiful scenery with photos and videos as we sailed into our picturesque little anchorage. Sailmaster Kenny allowed us some downtime where acrobatics and card games featured heavily. Another round of excellent dinners were had, and we received our navigation and anchor watch briefs for this next night at anchor.

The sun finally managed to break through the dreary layers of cloud that have been hanging around these past few days, and we’re all very excited at the prospect of a (relatively) unbroken night of sleep ahead.

A couple of shoutouts– one to Sophia’s Opa en Oma Bert & Truus for following along from the other side of the world, ikmis jullie verschikkelijk, hopelijk kunnen wij elkaar snel weer vasthouden.

Another big shoutout to Niamh’s family, who have no doubt been closely monitoring the website for the next update.

This is Niamh and Sophia signing off for White and Blue Watch respectively. See you on the next one!

Currently at anchor in Bramble Cove and experiencing moderate to strong ENE winds with nil swell. 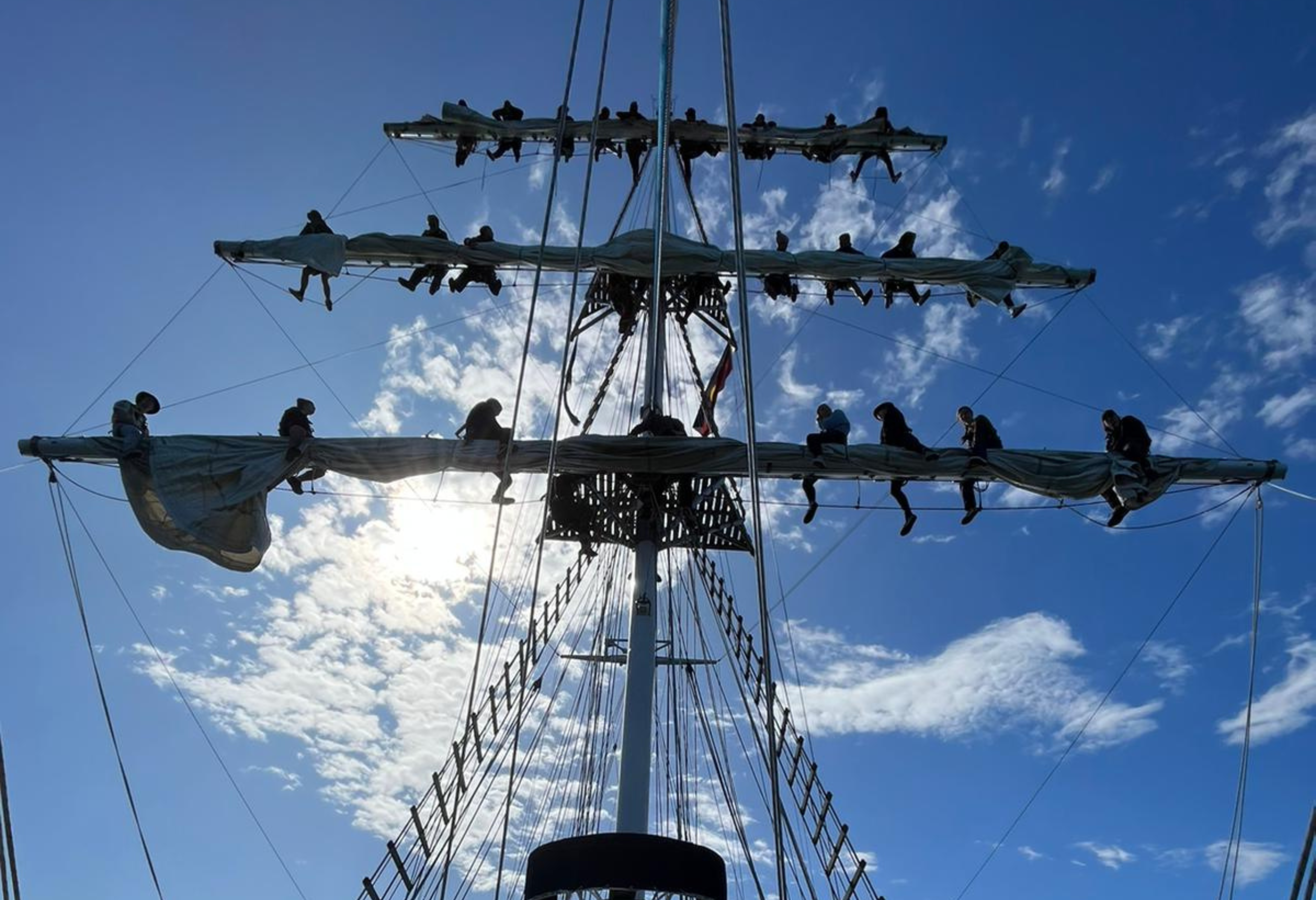 V12/22
Day 9 – Final night onboard (Command Day part 2)
We were abruptly awoken by the chime of our sail mistress, Nisha, calling all sailors to the deck to tack ship. Upon the successful completion of our tack, the smell of breakfast made by our fantastic cheffos lured our crew to the cafe to fuel their minds and bodies for the day ahead. Before handing back the keys to Captain Adam Charlie Farley, we finished off our remaining tasks; a lovely midships mural, morning brief and the highly anticipated 'happy' hour. The keys were now back in the hands of our trusted staffies, and the command day debrief soon followed. As groups, we discussed our positves, negatives and takeaways, and reflected upon the events of the past 24, stressful, yet rewarding hours. We were soon put back to work, with our engineer Sumo running rope races to decide the champion watch of the voyage. White watch was of course victorious, with the amazing Nova clasping the deciding point off Blue watch. After all our studious and practical efforts, trials and tribulations, the 'amazing' prize that came from our endeavours, was merely the choice of yard arm to conduct the dreaded harbour furling. Harbour furling went fantastically, obviously, and gave the perfect vantage point to observe the stunning sydney harbour under the warm spring sun. Once all back on deck, the party kicked into gear, as the music started bumping and Ash's famous pizzas started flowing. We took the opportunity to savour our last night together on the ship, in denial of the inevitable end to our voyage. Life long memories and friends were made in abundance, courtesy of the incredible adventure that is the Young Endeavour Youth Scheme, and all the opportunities presented to us. We are eternally grateful for the staff's dedication and passion to providing the best experience for our crew, and the youth of Australia. We feel as though our perception of life has changed, with the bonds we've made, and the attitudes we've developed are irreplaceable. As we write this, the shining lights of Sydney harbour rain down upon us, we dread our departure, yet we are excited by the prospect of reconnection with our families and sleeping in a bed, without the fear of falling out. This has been an experience of a lifetime and we are all forever grateful. Signing off, Jesus and J-Dog.
Read More 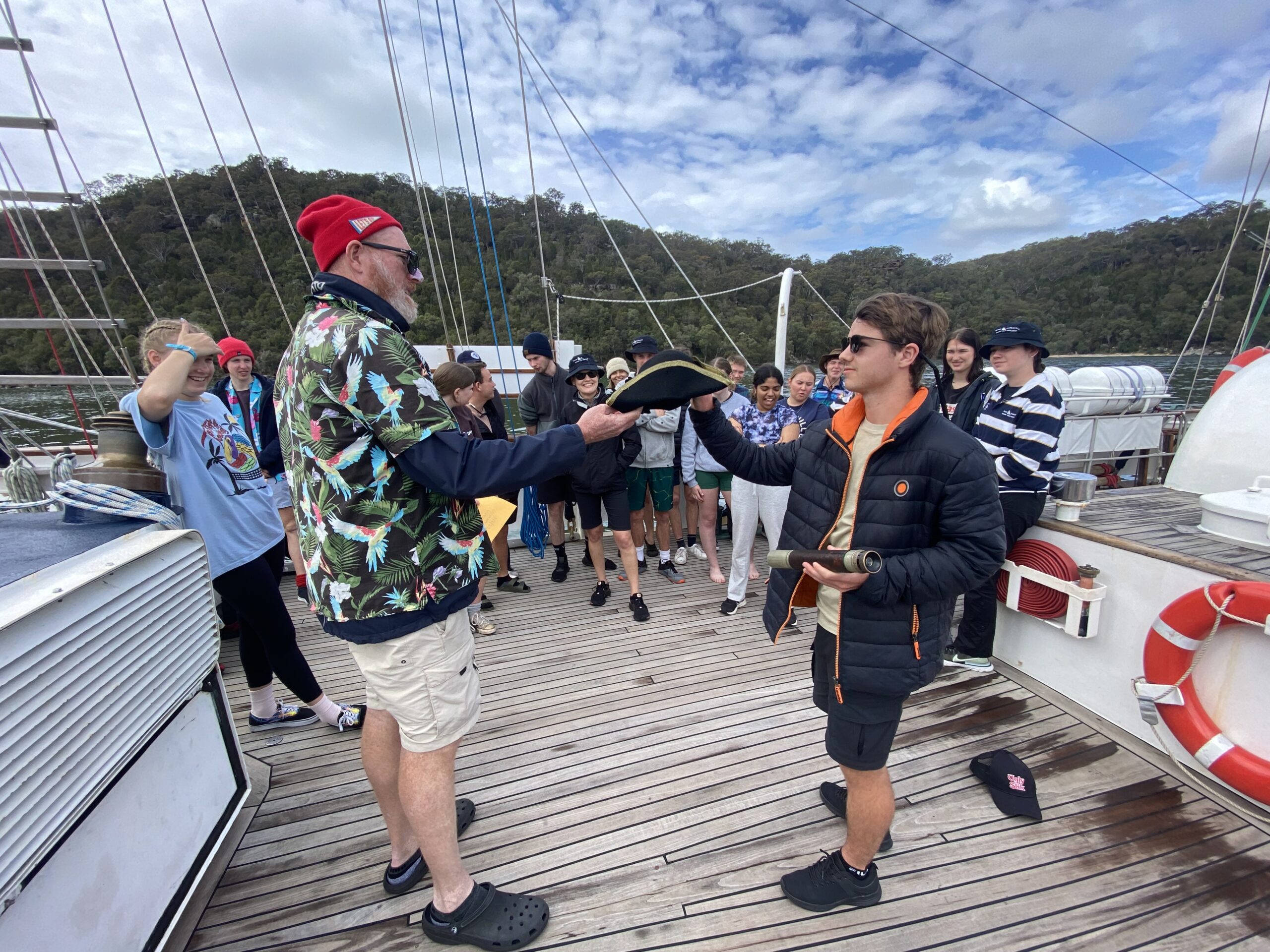 V12/22
Day 8 – Command Day
6.30 wakey wakey, all feeling excited and nervous about the big command day ahead of us. After a peaceful night in Broken Bay our youthies cracked on with happy hour before those with elected positions had a chance to sit down with their respected Staffies roles. At 1000 the joyful sound of the staffies singing their rendition of ‘Summer holiday’ and strolling through midships, virgin pina colada’s in hand, the official handover commenced. With Captain Charlie Jnr now in charge the youthies opened their package revealing a list of 27 various tasks and a point blank riddle that proved the guys really have a boys look, missing the clue that was hidden in plain sight. Our youthies hastily scrambled to complete a list of tasks provided to them by the now temporarily decommissioned staff. After the completion of a series of riddles, all those on board got excited to dig in to the first meal prepared by our new chef team. Bellies full of burgers and kebabs, the youthies finished up the hammock challenge supporting all 23 crew while the youthies assembled a 6 person beach assault team to row ashore (Hungry beach) to collect the critical navigational instructions. This was just one task among others including getting a photo of all Youth Crew aloft while at anchor. At 1500 having completed multiple tasks we lifted anchor and began our final journey to Sydney Harbour. The staffies gave us a little push, motoring us to the entrance of Broken Bay. There our youthies began to battle crazy winds and seas, setting sails to power them to the next way point. The newly appointed watch groups began to rotate through watches and paid a visit to the café for an amazing dinner of spag bol, fajitas and brownies. Holding steady against the wind, all youth crew ascended from their racks at 2145 for the first youthie tack! A successful tack got Young Endeavour on its new course to WP 2. Spirits are high amongst the youthies, all making the most of being in command of a tall ship. Hoping to arrive at the final waypoint by 0900, a successful first half to command day is done! From three new tall ship sailors, Captain Charlie Jnr, Cooper (Zooper Dooper) and Katie
Read More 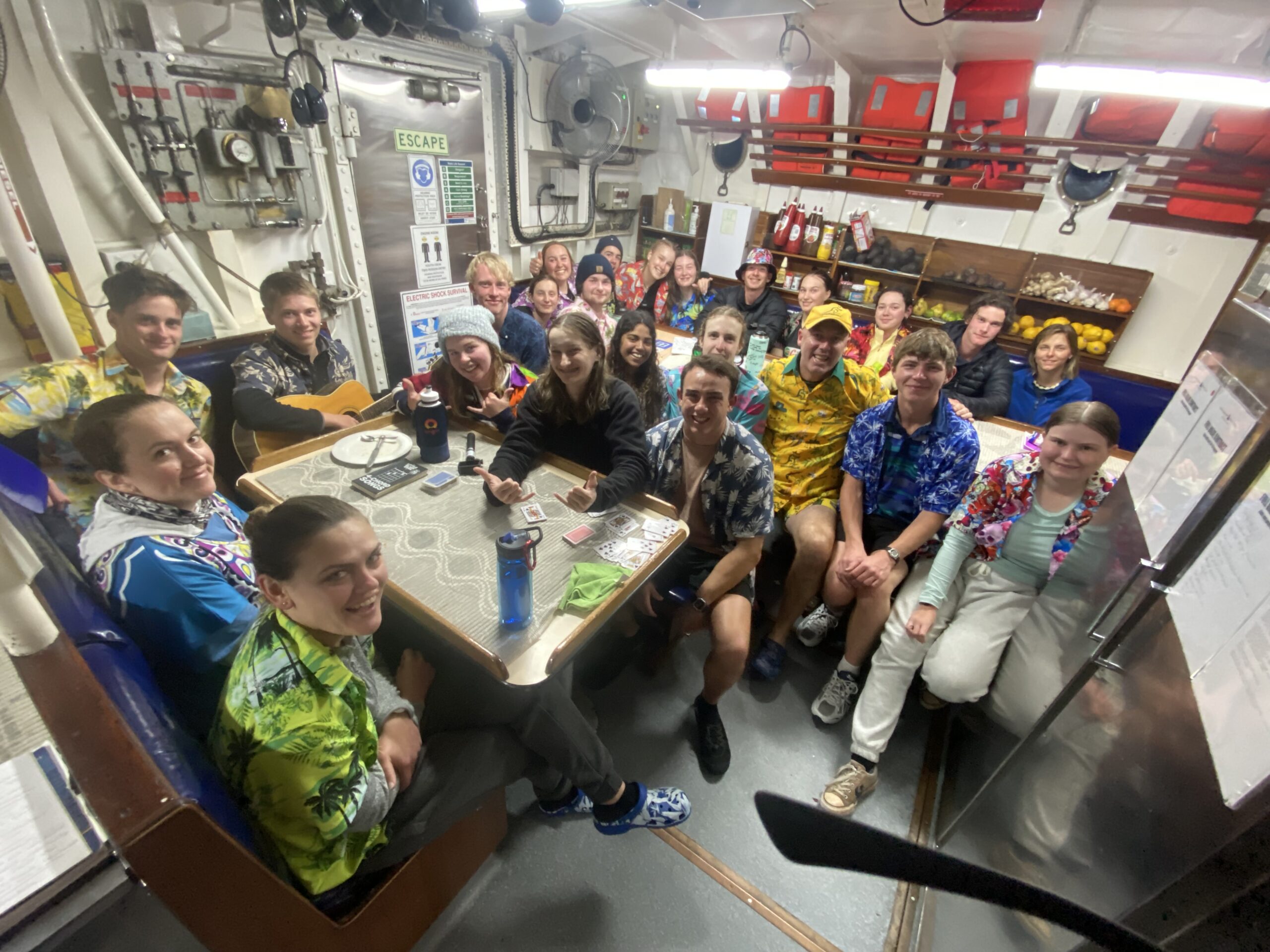 V12/22
Day 7 – Ashore to explore Ku-ring-gai
Ahoy dear readers, day 7 of our adventurous voyage found us anchored in Flint and Steel Bay in the vicinity of Hungry Beach. A lovely little spot in the Ku-ring-gai Chase National Park, just around the corner from Summer Bay ;) And although the weather has been less than summery, that did not deter some of our young sea-puppies from scaling the foremast, in the rain, for a cheeky sunrise climb. Believe it! Tough as nails that lot! The rest of us woke up at 0645 to breakfast, shower then the colours ceremony was conducted at 0800, followed by morning brief. Dion laid out the plan then cracked the whip and into cleaning stations we all went. At 0900 the ship weighed anchor and we commenced setting sails and conducted Demonstrational Tacks in the Bay. Demonstrational Tacks is the final puzzle piece in terms of preparing youth crew for tomorrows Command Day. Several members of each watch would visit the bridge and get a front row tutorial on how to tack this fine vessel, with running commentary from yours truly. We tacked back and forth several times so all members had a look and gained an appreciation of what's required. Then it was time for sail handling validation, whereby myself and Sumo put each watch through their paces to ensure they can set and furl sails competently and safely on their own. They all passed with flying colours ladies and gents, I'm sure you're glad to hear. We've prepared them as best we can and I'm positive it will be a successful Command Day. We returned to anchor and sent the youth crew ashore to explore Hungry Beach and stretch their legs, which after 7 days at sea, was much needed. Back in time for dinner, I then gave the Command Day brief to explain what to expect and the positions available, in order to take charge of this beautiful brigantine for 24 hours. After an amicable and democratic voting process, it gives me great pleasure to announce the following elected youth crew positions for this voyage... they are: Captain - Charlie (junior), Sailmaster - Nisha, Navigator - Cady, Watch Officer - Nova, Chefs: Gemma, Michelle and Sol, Watch Leaders: Tae, Eamonn and Alice. Congratulations you lot, I'm sure you'll serve the rest of your youth crew admirably. And with much excitement in the air, we put our favourite video on and cranked out the popcorn. The ship will remain at anchor at Hungry Beach overnight and commence Command Day tomorrow morning at 1000. Stay tuned tomorrow night to see how our salty sea-dogs fare. I wish them godspeed. Yours Aye, Captain Adam Charlie Farley+
Read More
2023 Voyages now available ⚓️APPLY NOW
ARE YOU SURE TO STOP AS AN AMBASSADOR?
Please wait a moment...