Hi Everyone,Welcome to day 34 of our voyage. Last night as I was sitting here trying extremely hard to put some words together we were hit by another storm, which was stronger than the last with winds reaching 48kts with a very large swell to match. This has moderated slightly today with wind strengths back to 25-30kts but the large swell has remained. This has made it impossible to do anything today except to keep our watches, have a feed, keep warm and catch some sleep when we can.Â Rather than talk too much about the weather I have included some photoâ€™s taken by Hannah in tonightâ€™s log so that you can gain some appreciation of what we are experiencing.Despite these bad conditions Katherine still came forward and offered to write tonightâ€™s log and I hope all of you appreciate it because as previously stated it is very hard to sit in front of a computer and write when the weather is bad. Enjoy!! And thanks again Katherine for your efforts.Â Â Until tomorrow, take careYours AyeCaptain GavCaptainâ€™s LogÂ Â Itâ€™s been a lumpy couple of days on the STS Young Endeavour. Last night, Minties Watch came up on deck at 1945 to find the Redskins aloft and sea furling the Topsail in difficult conditions. As they lay below (back to the deck), Minties and Redskins hurried forward to furl the jib. We lined up in a â€œtobogganâ€, sitting close together near the bow, a line of red, black and high-vis. There was a bit of untangling of the furling line, then we were ready! The Southern Ocean was ready too, and drenched us with spray. Many hands make light work and the jib was soon furled away.Â Â The Redskins headed below for some well-earned rest and all but two Minties headed below to the cafe. There was distressing news there, where some of the last tin of Milo had been spilt. Keel-hauling seemed like an appropriate punishment for the person responsible. The two left on the bridge helped lookout and Staffies Tenille and Sandy took turns helming. The waves are mesmerising. They seem to pile up below the ship then slide out in a rush to form deep crevasses to our starboard. They are easy to see on the approach as they are about as high as the bridge. They look like rugged blue mountains, capped with foamy snow. The occasional call of â€œwave!â€ rings out from the lookout and the sailors on the bridge duck as spray is whipped through the bridge by the wind. I saw a gust of 47kts. There is general agreement that this is what we are here for, loving it, even if we are looking forward to some land. Encased in my wet weather gear, I am warm and dry, able to enjoy the power of the ocean!Â Â Given the swell, I thought I would get no sleep in the 12-berth, right at the front of the ship. As it happens I slept very well, snuggled up to the bulkhead. However, I was summoned back on watch all too soon for the â€œForenoon Watchâ€. The wind had dropped off enough for us to lay aloft and cast loose the gaskets on the Topsail. Not wanting to miss out, I tightened up my harness and ascended with three other Minties â€“ Greg, Tito and Caitlin. Despite my sailing gloves, my fingers were numb as I reached the yard. Now how am I supposed to get these knots undone? I carefully edged along the yard, hugging it close and staring straight down at the deck and the wild seas and deck below. The sail was eager to be free and started to flap in the wind as soon as the gaskets started to come off. Topsail loosed and Minties back on deck, we set the sail. Two stayed on deck and the rest headed below for some more breakfast. Surely that was enough for one watch? Nope, the wind dropped below 30kts and four more laid aloft (Tito, Greg, Julia and Effie) to the Toâ€™gallant. The sail was set just before lunch. As we stood on the bridge admiring our handy-work, a large wave rolled us to one side. Tito, who was standing next to me, slipped and for a moment looked like a flag flying in the breeze. He was soon returned to the deck of the bridge, but it ended the watch on a high as we headed down for some Mac and Cheese lunch.Â Â Watching people move about the ship is quite entertaining. Everyone will take a few quick steps, then pause, a look of concentration of their faces. It looks like a strange sort of posing and the roll becomes very funny if viewed in this way. Everyone seems to be moving around with confidence though. How strange it will be when I can brush my teeth without clinging to the basin! There was some concern that Ushuaia will not live up to expectations, although, if it is warm, dry, not rolling from side-to-side and has a large supply of chocolate, then Iâ€™ll be happy.Â Â Such eventful watches left me sleepy, so I had a nice afternoon snooze. Then it was time for one of the dayâ€™s biggest challenges â€“ a shower. I was more successful than one of the boys (not to name names), who was flung out of the shower by a roll of the ship. There were only three or four people brushing their teeth, so a small audience. Warm water and a clean(-ish) feeling is glorious and I was ready for dinner and another watch. The cafÃ© is full of people playing chess, eating zoopla doopas and generally enjoying the evening. The Watch is almost over and itâ€™s time for the challenge of brushing my teeth and climbing up to my bunk. The adventure continues!Yours aye!KatherineFamilyâ€¦Duddle says hiÂ Â Â Â Â Â “Â

Currently located just over 300nm from Cape Horn and experiencing strong 25-30kt NW winds with a 5-6m swell. Current temperature is 7 degrees with a wind chill of -4. 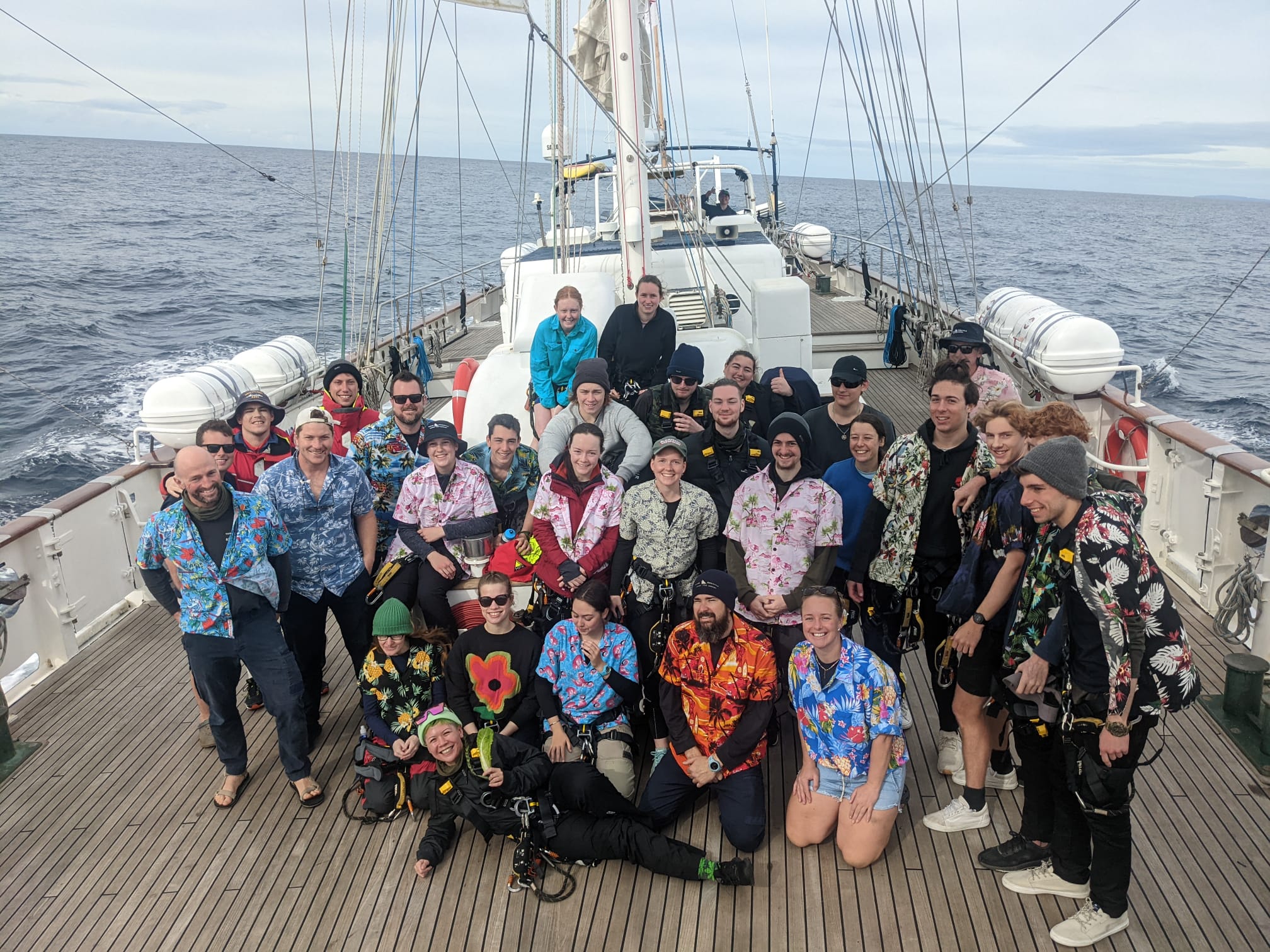 V09/22
Day 6 - Ahoy Queensland!
Bonjour dwellers of the land. How are you? Because if you were to ask us that same question, we would say, “We are thriving since we finally gained our sea legs”. Today we spotted many whale breeching the surface to say hello. We waved back of course. Today we made the exciting last leg of our journey in NSW and have officially entered Queensland! As we are writing this, we are about to pass south of Moreton Island. Today, apart from gawking at the whales, we did many drills of setting and furling sails, (we think Kirby is going to lose her voice). Something else exciting, today, many of us participated in the ships tradition to wear a floral tee-shirt on Fridays! And for the people to have happy hour in the aft cabin, we were graced by the lovely Emma in her floral onesie, her singing and dancing. The wonderful Captain Charlie Farley, briefed us on the angles best to sail, and what sails to use when sailing into and in front of wind. As well as this, TJ taught us the reason for the use of Morse code, the interpretation of flags, and Evan teaching us many types of knots. We would like to thank the engineers Hoppy and Shaun for keeping many of the underground things running, such as hot water, flushing toilets and the engines when we can’t use the sails (during northerly winds). Kirby and Dom Shout out to Mark, Tracey and Abby! Shout out to Richard, Kirrily and Baxter!
Read More 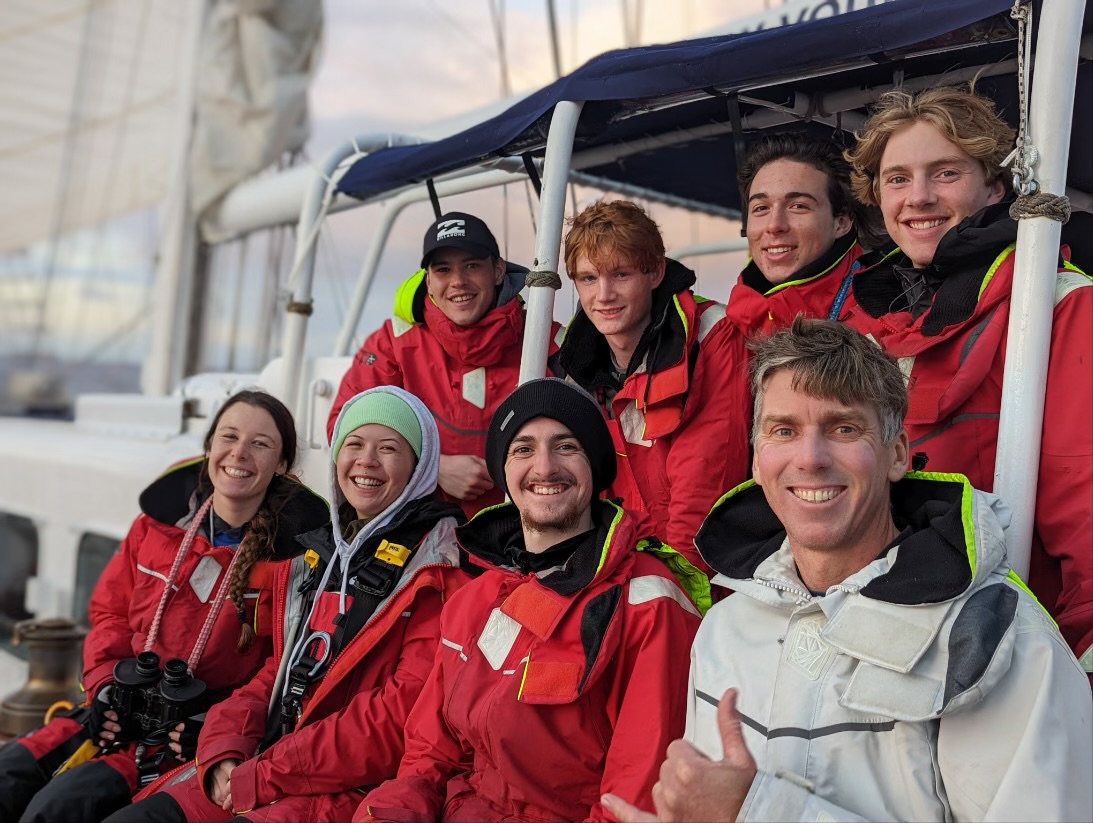 V09/22
Day 5 - Sailing the humpback highway
Ahoy there landlubbers and fellow crewmates, we have survived anchor watch through the night without staffy supervision (big win). To celebrate we gathered on deck after the usual blasting of radio wake up for some sunrise yoga in Trial Bay lead by yogi master TJ. Harmonies may have been off this morning in the anthem belt out, however this was quickly forgotten after a sensational, yet educational, "Chats with Chucky" and a feature of the mystery box. Happy hour ensued with some exceptional sing along bangers today (shoutout Ash and Shaun) followed by weighing anchor and climbing aloft. As the vivacious navigator Emma suggested, the lack of wind had us packing the square sails tightly and motoring out the bay northward. To our surprise many dolphins and whales had similar ideas! Lunch - it gets better every day (Jarod you legend)! With fully bellies, our next challenge was to conquer rotational tacks, extending our knowledge of the ship's rigging and roles outside our assigned watch stations. This knowledge was further tested with not one, but TWO rounds of ropies (with a clear winner established IYKYK). In the afternoon we had a quick meteorology lesson with Evan and played a strategy game (Mafia) on deck, there may have even been a mutton bird sighting - waiting for Cap'ns Confirmation. Bowsprit was in full use today (Cheers for the supervision Matty), evidence of which can be seen in the many warm faces making friends with cold milk cartons in the fridge after dinner (thanks for the aloe Hoppy). News of the last supermoon óf 2022 have rumours of sleeping on deck under the stars spreading through the youth crew - check in tomorrow in CLOG Day 6 for confirmation of decksleepers whereabouts (or if it even happens!). FROM WHITE WATCHIES THRU & THRU SOPHIE C AND IVANA B Shout out to the Cottam & Gabrielli crews!!!!!!!
Read More 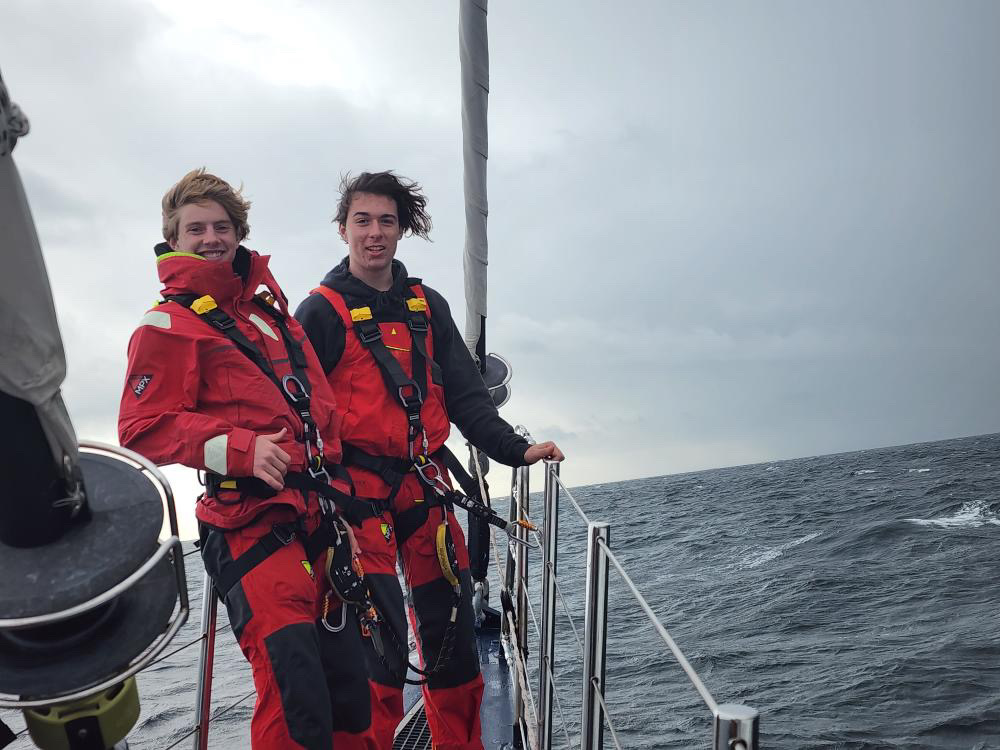 V09/22
Day 4 - South West Rocks stopover
Ahoy dear readers, despite the wind and swell, Day 4 of our voyage began with some youthies laying aloft during the night with some friendly visitors (whales and dolphins) to help us get through. We began the day with another wake up song, an amazing breakfast and another Happy Hour. After breakfast, we got into some briefs with Chucky about the "Rules of the Road" to gain an understanding for sailing and avoiding collisions. The conditions calmed down and the sun came out which made for perfect sailing as we came into our first stop at South West Rocks (At last we can see land!!). The Youthies were absolutely thrilled to be anchored, hop in the dingy and cruise to land. It took a while for our sea legs to adjust but eventually we made our way up to the Trial Bay Gaol for a bit of sightseeing. After checking out the old prison we made our way to the beach for an afternoon full of exciting games and geocaching, some of us were lucky enough to pat some friendly kangaroos. The vibes were high as we made our way back to the Young Endeavour for dinner on the deck under an amazing sunset. To finish off the night we got to know each other better through a game of "Three Way Talks" which involved some funny stories, charades and fun facts being shared about each other. With some shorter watches tonight (and no more sea sickness) we are all expecting a good nights sleep and another fun filled day tomorrow. Until then, goodnight and talk to you next time! From GRACE BUCKMASTER and KAITELYN WALTON Shout out to Mum & Abbie! shout out to Mum, Dad, Emily, Nick and everyone back home
Read More
New 2022 voyages dates available ⚓️    APPLY NOW