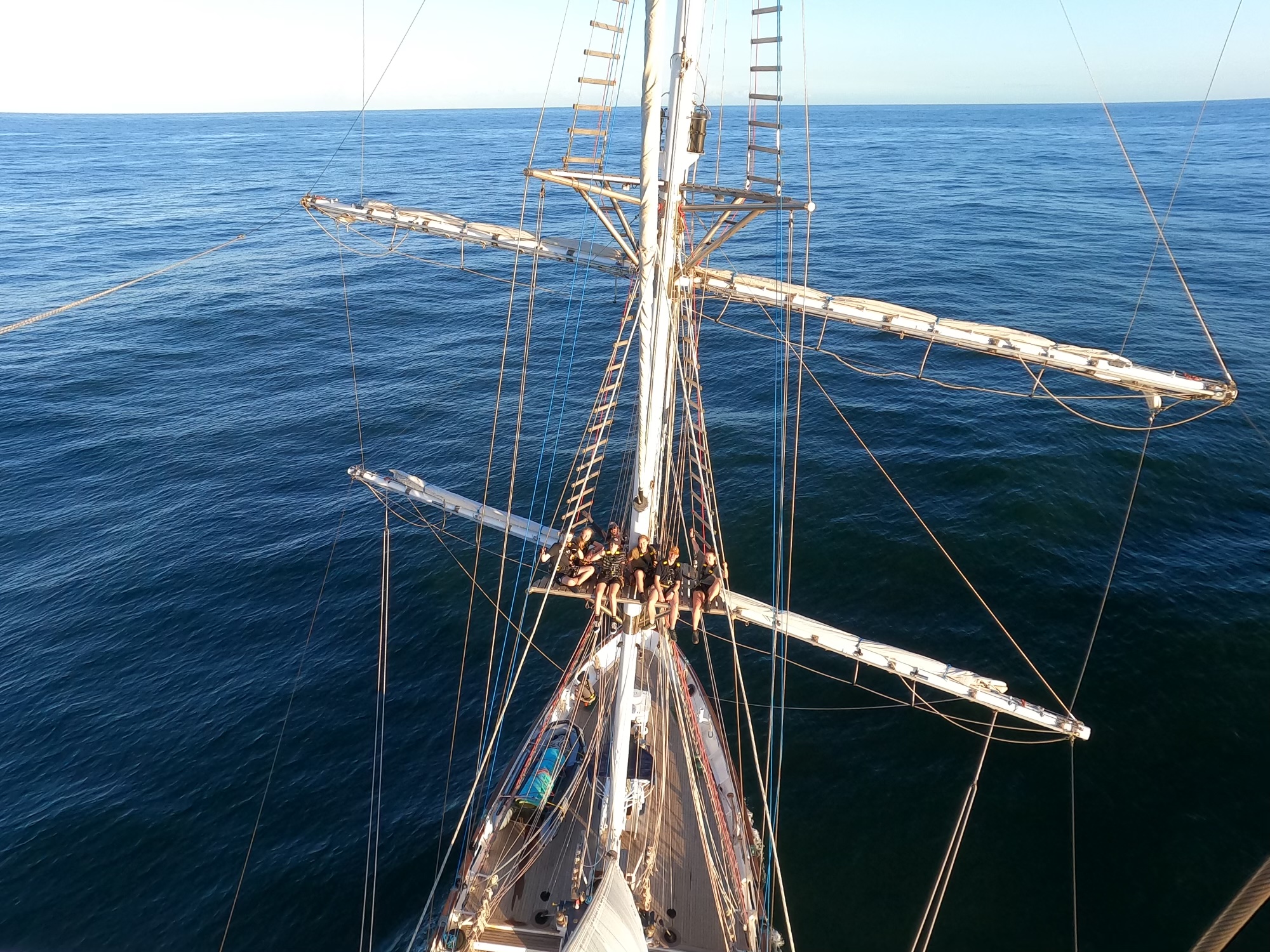 We started off day 3 sailing towards Jervis Bay on open seas, the Sydney skyline no longer in sight. Starting at 0700, the crew tired from the night watch duties, woke with big grins and much excitement. After a hearty breakfast, cooked by the renowned chef Jenko, we soon sailed into the protection of Jervis Bay and dropped anchor. With fair winds and calmer swell, the crew succeeded in the first challenge of the Young Endeavour: To get one’s sea legs!

Working hard under the instruction of watch leaders we set the main sail and “2, 6, HEAVE” was the common phrase of the day. All watches Red, White and Blue have started to show their strengths in sailing and began to truly appreciate this great ship.

The hard work displayed by the youth, was rewarded with a well-earned break of going ashore. They then proceeded to dramatically touch solid land, the one thing they had been missing over the last 3 days. Some more excited than others, when it was time to go back to the ship, some still clung to the land. During our time ashore there were many activities such as dodgeball, soccer and group team bonding exercises. But most of all everyone was glad to have a nice and relaxing swim.

On our return to the boat, we began a bonding exercise in which three crew members were randomly placed in teams. This began the process of closely knitting the crew together, learning some facts and background knowledge of each other which was previously unknown.

Later that night, the youthie’s in their groups of three had to awkwardly perform the new information gained, with a twist. They presented this in first person of another member of the group. This led to a hilarious performance, gaining laughs and new insights, from all aboard.

Tonight as we write this log, the first anchor watch is soon to commence, many ecstatic about the responsibility and the confidence they will gain by looking after the ship overnight by themselves! Goodnight and God bless. 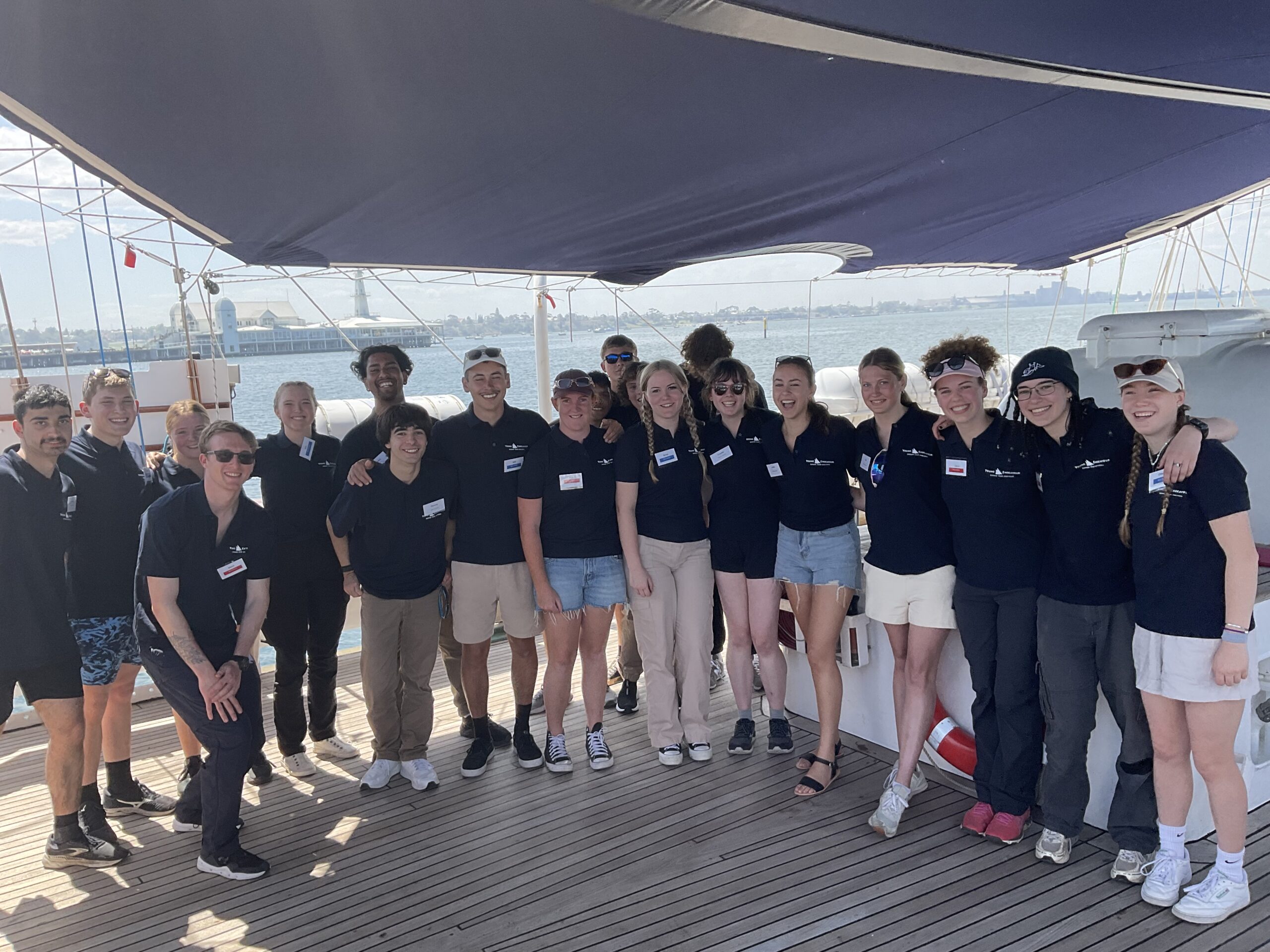 V14/22
Day 2 – Happy Hour and Rope Races
Ahoy there Shipmates, The youth crew of V14 awoke to the startling, true blue sounds of John Williamson’s “Home among the Gum Trees” (Sail Mistress Emma’s pick) at a crisp 0630 for a few brisk laps around the deck. After a scrumptious English breakfast provided by our magnificent chef, Jared, the youth crew assembled on the deck for the flag ceremony, accompanied by the National Anthem. The morning brief followed, which included a rundown of Emma’s Plan for the Day and Navigator Evan’s navigational plan and meteorological forecast. Next was the Youth Crew’s first experience with Young Endeavour’s version of ‘Happy Hour’, when the youth crew give the internal living and working areas of the boat a good clean. The Young Endeavour Ship’s brass bell also received a loving polish. STS Youth Endeavour weighed anchor at 0900 and commenced the transit to depart Port Phillip Bay through The Rip and commence our passage to Deal Island. This occurred at 1130, which coincided with slack water to facilitate an easier exit of the bay for us. Next was lunch followed by a little free time, before we launched into the first edition of ‘Rope Races’ for the voyage. This (competitive) Non-competitive activity between the watches is designed to improve Youth Crew knowledge of the names and location of important safety equipment and parts of the sails and the Ship, in a fun environment. ‘Ropies’ are usually run every other day during the voyage. The youthies then re-joined their watch leaders for some more deck safety and sail handling training on deck, before we exercised the procedure for responding to and recovering a Man/Woman Overboard. It is important that whenever we have an emergency onboard, the youth crew muster in their watches and report in so that we can account for all personnel. This was one of the aims of today’s exercise. In the afternoon we also gave the Mainsail brief, set a full press of sail and then took the ship to Tacking Stations, which is the manning state we need to be at to turn the ship through the wind to put it on the opposite Tack. The Youth Crew had obviously been paying attention during the training because they attained the required standard after practicing just two Tacks. This was very pleasing to see and gave me the confidence to be able to sail through the night. The plan is to continue on passage overnight and anchor at Deal Island in the morning. We will give the crew the chance to go ashore and see some of the island in the forenoon tomorrow, returning onboard for lunch, before we weigh anchor and re-commence our passage towards Sydney.   Captain Mike Gough
Read More 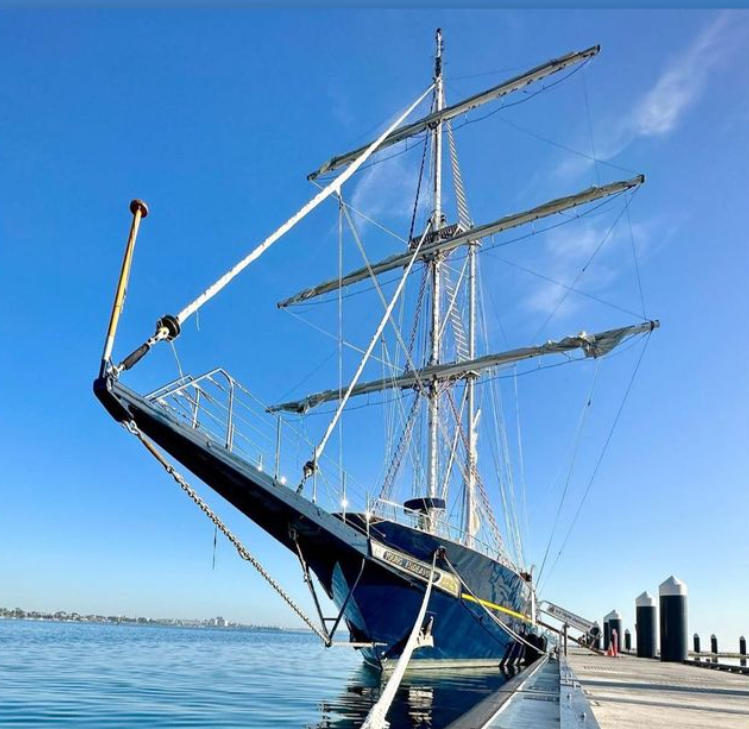 V14/22
Day 1 – Icebreakers and Mast Climbs
Ahoy there Shipmates, Welcome to the Captain’s Log for Day 1 of Voyage 14/22, Geelong to Sydney. The Youth Crew joined the Ship berthed on the Wave Attenuator Pontoon, adjacent the Royal Yacht Club of Geelong, Victoria. It was a beautiful sunny summer’s day with a breeze which freshened as the day progressed. The Youth Crew embarked the ship at 1500 and were welcomed by myself and the Staff Crew for the voyage, who included: Sail Mistress Emma, Navigator Evan, Watch Officer Phil, Engineers Sumo and Matt, Chef Jared, White Watch Leader Matty, Red Watch Leader TJ and Blue Watch Leader Shaun. We departed Geelong at 1600 and conducted the passage to our overnight anchorage at Port Arlington. Along the way the Youth Crew undertook ‘Ice Breakers’ and Ship Tours. On completion of anchoring we had dinner and then launched into the harness and climbing briefs, before laying aloft to conduct First Climbs in our relatively sheltered anchorage. Climbs were conducted efficiently, and I was pleased to see everyone successfully climbed to the Top Gallant Yard on their first attempt. This was completed by 2300 and the crew were sent to bed for a well-deserved rest. The intention is to remain at anchor overnight and weigh anchor at 0915 and conduct the passage to ‘The Rip’, aiming to transit out into Bass Strait on the ebb tide at 1130 to commence our passage to the next planned anchorage at Deal Island. Good night and stay safe. Captain Mike Gough 📸 @Peter_Redmond71
Read More 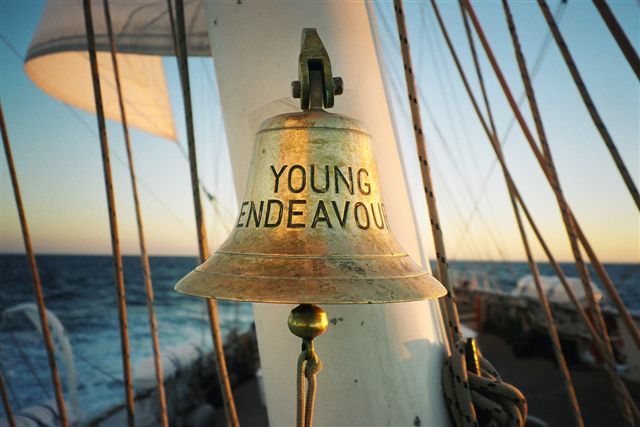 V13/22
Day 10 – The Rip and our final destination
Ahoy there dear readers, this is the final night of the voyage and we can finally take a collective breath and relax our white-knuckle grip on the ship, as we have come safely to anchor in Corio Bay... in calm and benign waters once again. We remained at sea overnight continuing Command Day, motorsailing NW towards the famous Rip and here's Youth Captain Felix with a final wrap up: 2-6 Hey! Youthie Captain Felix here to wrap up Part 2 of Command Day and what a day it was. Some expert navigation by our duo-team of Rish and Stephanie, accurate calls by our sailmaster Claire, and a dash of good vibes put out by yours truly, our young crew made it successfully through 50kt winds through the Bass Strait and on to Port Phillip Bay, catching the incoming tide right on time and cruising into the aforementioned bay without a hitch! With a job well done our Youthie Chef Dayna served a wonderous meal just before handover time back to the Staff Crew. A night of songs and celebrations has ensued and- oh! Time for me to head back to the dance floor! - Felix. Youthie Quote: "It’s a beautiful bridge and it’s going to be there." – Kelly’s Heroes, Oddball And so handover was conducted at 1300 just before entering the Rip and proceeding up the Western Channel. Youth Crew were given an opportunity for a wee siesta before re-grouping to debrief the Command Day activity and then once more with their Watch Leaders for End of Voyage debrief. We entered Corio Bay and came to anchor at 1730. Jarod had whipped up a pizza storm down below and so we all enjoyed a lovely view and chill with pizzas on deck. Marvelous. Then to round out the night, a final recapping of the voyage in the form of a photographic slide show and a bit of a dance party to celebrate Clay's birthday. Happy Birthday shipmate. Well, that’s that. 10 Days ago 24 youth crew from places various, came together to sail this vessel, have fun and challenge themselves. They have not only done that, but have faced and overcome fears and learnt a lot about themselves and each other along the way. Tomorrow they will leave with new skills, improved persistence, resilience and adaptability, as well as generally knowing they are more capable than what they probably thought. And of course, having made great new friends - some, friends for life. What a fantastic job we have. Yes, we know. Yours Aye, Captain Adam Charlie Farley+
Read More
2023 Voyages now available ⚓️APPLY NOW
ARE YOU SURE TO STOP AS AN AMBASSADOR?
Please wait a moment...