In Search of Crow Eating Tuna

Current situation at 1800: Last night the YC spent the evening planning, preparing and dreaming about their Command Day. I handed Command of this fine ship to Shane Murray, 22, of Sydney at 1000 and they started to get underway. Lots of head scratching later and we finally got going.The light and flukey winds defied all attempts to get the ship pointed in the direction they needed. Later, a sea breeze emerged and by late afternoon YE was sailing nicely along, heading out in to the deep blue (or deep azure).They are working well as a team and the plan seems to be going as scheduled. They are headed out in search of the little known and rarely seen, South Australian Crow Eating Tuna. We’ll get to the last known location of this fish this evening, when hopefully we’ll bring one on board and then return to Port Lincoln with our catch by 1000 Tuesday.Peter Trewin, 18, of Sydney:Hi Mum, Dad, Ben, Aunty Susan and Uncle Barry. As you have probably figured out today is Command Day. I got voted as a Watch Officer whose job is to take over the running of the ship on the Captains behalf when he is not present on the bridge.Anyway I am having a ball here. Missing you guys and I suppose I’ll see you in a few days. P.S. Say hi to Rex and Blossom for me.Prue Rees-Lee, 19, Melbourne:Hi Mum, Dad, Tom and Alice, You would love my job for Command Day, a member of the Beach Attack Team or BAT. When we get into Port Lincoln tomorrow morning I, with threeothers, get to row a boat into the mainland and try to get as many people as we can to sing the national anthem with us while claiming the land for the youth of Australia on behalf of the Young Endeavour. I didn’t get sea sick and look forward to seeing you all soon.Bridget Taylor, 19, Brisbane:Hi to everyone, hope everything out there is good. Today is our youth crew Command Day and everything seems to be going well. I too, am a watch officer and trying hard to keep track of where exactly we are on the map – easier said than done for me but certainly not impossible. Last night we me met with a staff member whose role we were taking over to try and take as muchof their knowledge as possible. The whole process resembled last minute exam cramming, especially this morning when it came to actually recalling it. But slowly we have gained speed and direction.Will Catch up with you soon.Stay tuned,Andrew Davis 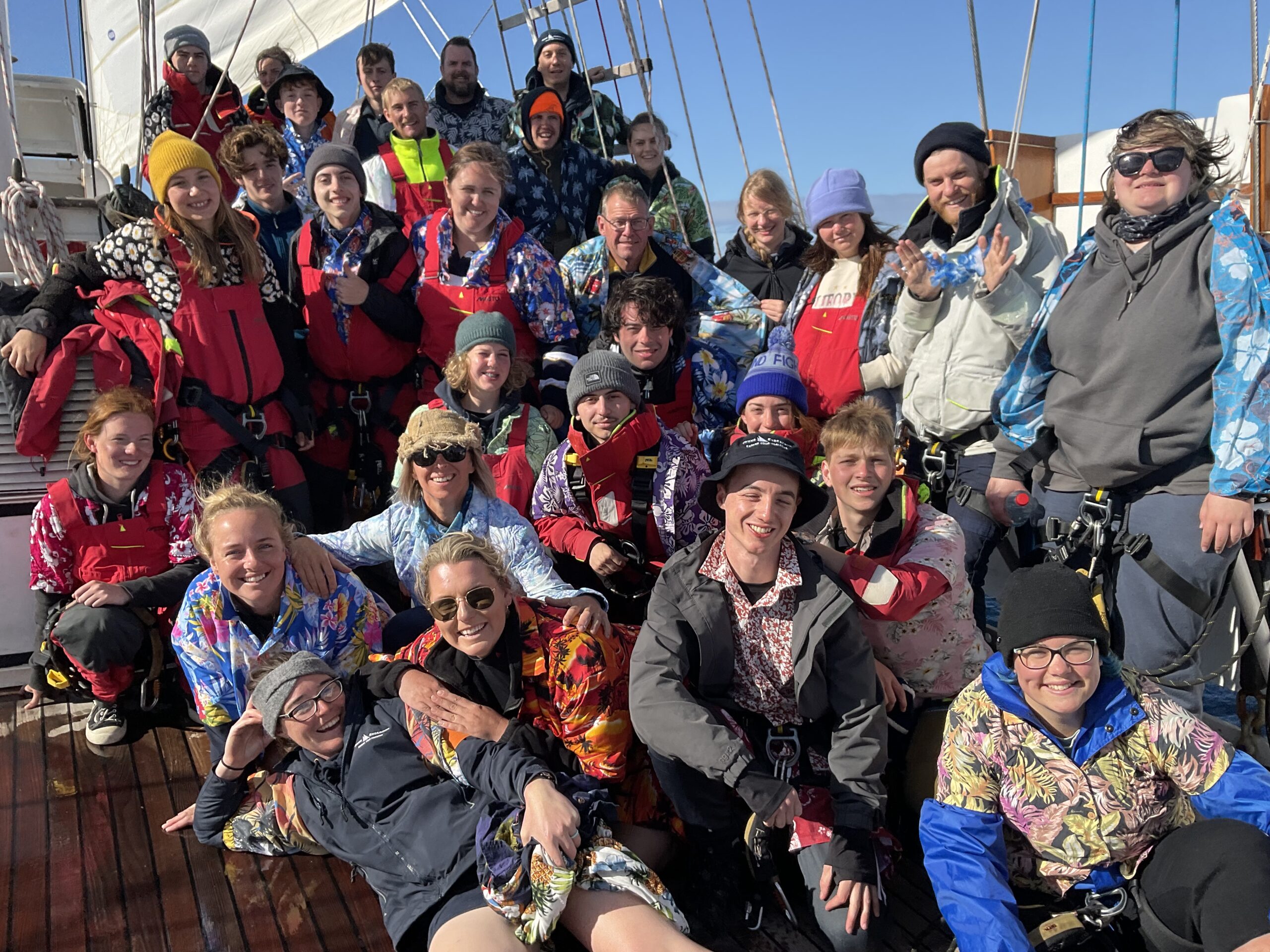 V02/23
Day 10 – The penultimatum
Ahoy there dear readers, this penultimate day of the voyage began in Carnarvon Bay, Port Arthur, in a snug anchorage in the lee of the ISLE OF THE DEAD-ed-ed-ed-ed (wow spooky echo!). Staff crew mustered and swung into action at 0515 (whilst youth crew slept soundly), weighing anchor and departing the bay accompanied by numerous Delphinus delphis... Short-beaked Common dolphin. At the same time the sun reared it's lovely head over the horizon, creating a spectacular sunrise over the southern Tasman Peninsula and Tasman Island, then drenching Cape Raoul with all it's glory. It was such a majestic morning all the staffies were tripping over each other to get the best shot. Luckily your humble narrator was maintaining a professional and composed, weather-eye out front ;) We continued on across Storm Bay then ducked into the D'Entrecasteaux Channel for a wee look, all the while youth crew conducted happy hour, rope races and end of voyage debriefs with their Watch Leaders. It was shortly after lunch that we made a bee-line for Hobart town and then did berth alongside Princes Wharf at Salamanca for a couple of hours. During this time we took on fuel and victuals for the next voyage (as the youth crew before them had done for us #payitforward) and youthies had a leg stretch ashore. At 1600 we cast off lines and proceeded to anchor in Sandy Bay for our final night. Pizzas were great and so was the company. Then it was time for end of voyage admin, staff crew safety meeting, voyage debrief, youth crew critiques, etc. Next minute the sun had set and we flashed up the projector for a final night slideshow to recap and reflect on the amazing adventure we had just about completed. Then there was cake to celebrate the ships 35th year in service to the youth of Australia. On this day (January 25th) back in 1988 the delivery crew hauled down the British Red Ensign and Union flag, and then hoisted the Australian National Flag and the Royal Australian Navy's Australian White Ensign, in the presence of the then Prince of Wales, now King Charles III and the late Diana, Princess of Wales. It truly was and still is, an amazing gift that keeps on giving. And so it has been a very special day indeed... 10 Days ago 22 youth crew from places various, came together to sail this vessel, have fun and challenge themselves. They have not only done that, but have faced and overcome fears and learnt a lot about themselves and each other along the way. Tomorrow they will leave with new skills, improved persistence, resilience and adaptability, as well as generally knowing they are more capable than what they previously thought. And of course, having made great new friends - most probably, friends for life. It never gets old for us staff members, as we truly love our work. Yours Aye, Captain Adam Charlie Farley+
Read More 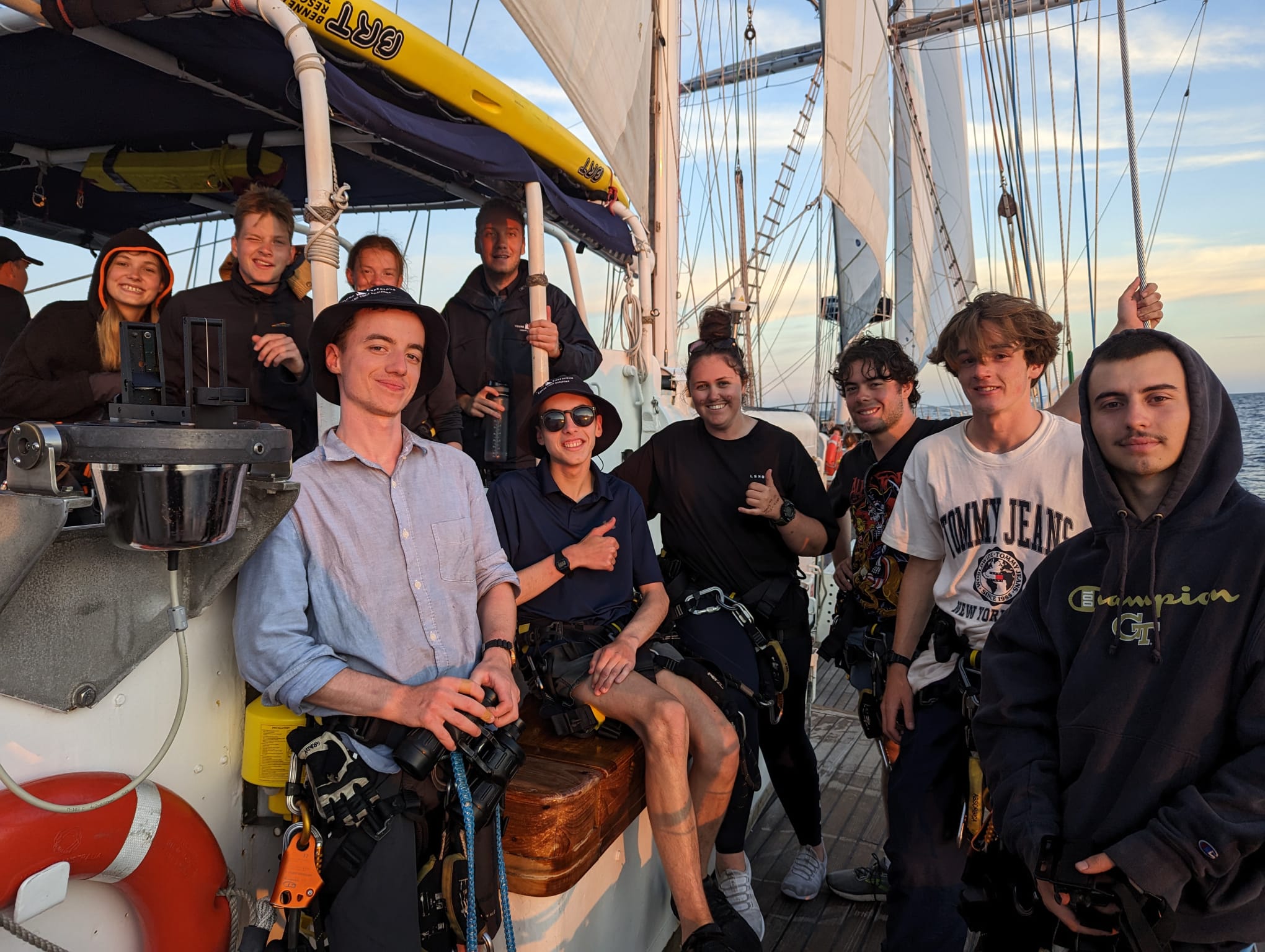 V02/23
Day 9 – Command Day Part 2
CLOG (Captains log) nine kicks off in the blur of an intense night: ALL HANDS TO TACKING STATIONS! At 2245 we urgently needed to tack to ensure we made it to our waypoint on time. With spirits alive, we manouvered our ship with confidence, however, the decision from command was made to resort to motor sailing due to wacky wispy winds and predicaments beyond prediction. The night owls on the bridge enlightened us to their astoundingly diverse and at times harmonious musical talent with their rendition of ‘Hooked on a Feeling’ at the 0650 wake-up call, shooting us out of bed to furl all sails except the main staysail. We briefed at 0715 and breakfasted shortly after on the cooks’ nutritious and delicious omelettes, having been entertained by stories of Staminade. Happy hour saw us scrutinisingly scrubbing and pitilessly polishing till our ship was nice and clean and in a state to hand over, and the keys were solemnly returned to the reinstated Capt. Charlie Farley at 1000. We “saw Esta” (siesta) and feasted on some sumptuous and scrumptious bangers, mash, pies, and vegies. This fuelled us for our expedition ashore to Port Arthur. We were looking at the ruins of asylums and penitentiaries whilst pondering “how’s the serenity?” as we were enveloped by the vibrant, fresh, and luscious landscape. Our souls were cleansed on the invigorating trip back on board via Salty Airways™. Our souls were then promptly nourished by more of Ash’s unmatched culinary capabilities, with tunes, dancing, and feasting on deck. We then took time to reflect on the challenges and rewards of the last 24 hours - of Command Day - meditating on the takeaways from the exercise, with guidance from our wonderful Captain & Crew. They made clear to us the importance and complexities of such ideas as resilience, communication, and challenge so we can be better prepared for our futures, whether aboard or off board. The rest of the night will see us on anchor watches, getting ready for Hobart, and most of all catching some hard-earned rest. Signing off, Gemma and Henry Shout-out: Hi Fam! I hope you’re all well, and ready to be bombarded with photos and stories of this adventure of mine for a very long time. I will see you all soon - Gemma Shout-out: Hi Mum and Dad, I presume you’re still reading the clogs (Capt. Charlie Farley’s lexical invention, by the way), so here I am. Command day was really fun, and the whole trip has been such a great and varied experience. I hope your trip is going great. See you soon. - Henry
Read More 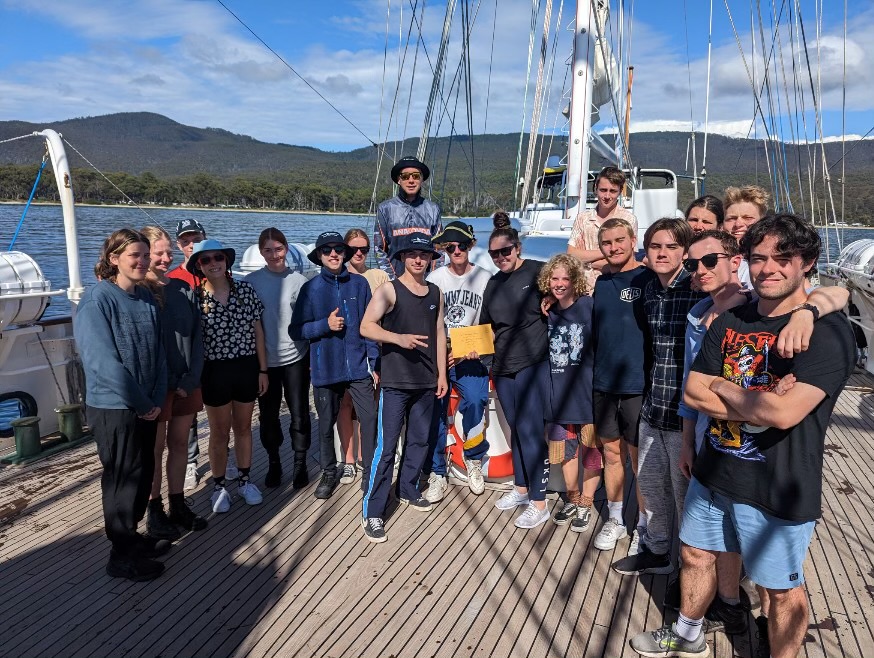 V02/23
Day 8 – Command Day
Ahh Command Day. The day where staffies stress in secret, and leaders arise amongst the Youthies acquainted with the high seas merely days before. The pinnacle, high point of Young Endeavour, yet the lowest anyone has seen the TWS (true wind speed). Phase One of Command Day kicked off in civilised fashion, with democratic elections being held aiming to assign Youthies to critical roles. When the dust settled, Young Endeavour emerged with an eager and spritely new command team, consisting of Captain Nick, Sail Empress Louise, Watch Officer Keely, and Navigator Liam. Dylan, Dean, and Liz also took the helm as Watch Leaders, with Gemma, Grace and Freya donning the aprons as chefs. After receiving the keys to the ship at 1000 we began undertaking a whopping list of 30 tasks assigned to us. Following an amazing meal of garlic prawns and chicken skewer wraps from our elected chefs, we sent a party to row ashore to locate the information we needed to set sail. In the meantime we constructed a hammock to fit every youthie on board while Abbie and Izzy designed a mural of our journey thus far. Heaving anchor at 1500 we began the theoretically short journey to Port Arthur but with the wind not acting in our favour, it’s scheduled to take us all night. Over the course of the afternoon us youthies set and handed multiple sails in the hope of coaxing our lovely home over the waves but unfortunately it was to little avail and we found ourselves approaching a lee shore. Quick thinking by our Captain Nick led us to wear ship in an attempt to avoid it however the wind did a 180 on us and we were back to square one. Starting an engine for a few hours was the only way out and so we did just that. The afternoon wore on with us doing everything possible to move faster over the waves to reach our waypoints before 0900 tomorrow morning. After an amazing Italian meal which somehow ended with texta moustaches on everyone and an amazing skill at dinner towards our Endeavour games, we settled into our evening routine, continuing motor-sailed until the early hours of the evening when the decision was made to stop the engine and continue under sail alone. As I’m composing this we have just set another two sails and we are continuing on at a nice leisurely pace expecting a night of little sleep and lots of memories. The sun setting over our starboard quarter and the Queen Elizabeth cruise ship visible on our port side. That’s all for tonight as my berth is calling. Cya Later. Shout out: Hello to all my friends from moot, wider scouting, Leeuwin and Windeward Bound. Love to my family in Perth and I hope you’ve not rented out my room yet. - Aeryn Shout out: Hi family!! I’m not sure if you guys are even reading these little updates/blogs but part of me is hoping you are. It’s been wild on this Voyage, in a good way though! I can’t wait to tell you all about it. I miss you guys heaps every day! Take care of yourselves and I’ll see you all soon! – Sending my Love x. - Freya
Read More
2023 Voyages now available ⚓️APPLY NOW
ARE YOU SURE TO STOP AS AN AMBASSADOR?
Please wait a moment...