Ahoy there everyone,After Sail Master Kristy-Lee roused all at 0700 for the opportunity to have a second rope swing into the clear waters of Blue Pearl Bay before breakfast. Those willing conducted a spectacular snorkel in Blue Pearl Bay observing the abundant marine life and coral formations before returning to the ship. The ship then weighed anchor and motor sailed to anchor adjacent Funnel Bay for a pizza smorgasbord feast as the sun set across the Whitsunday Islands. The Youth Crew then completed their final assigned task by presenting a slide show and ballad, capturing various memorable moments and experiences during the voyage. This gave everyone the opportunity to reflect on the past 11 days and their amazing once in a life time journey. The remainder of the evening was spent completing end of voyage questionnaires and letters to themselves, which are returned to each Youth Crew member six months after voyage completion. The ship will depart our anchorage early tomorrow morning for a final passage into Abel Point Marina berthing at 0700 before farewelling our young adventurers at 1100. Until then it has been an honour and privilege to sail with the Youth and Staff Crew of Voyage 07/12. I wish them all the best for their future endeavours. For the final time. Yours Aye Captain Damien â€˜Carpe Diemâ€™ 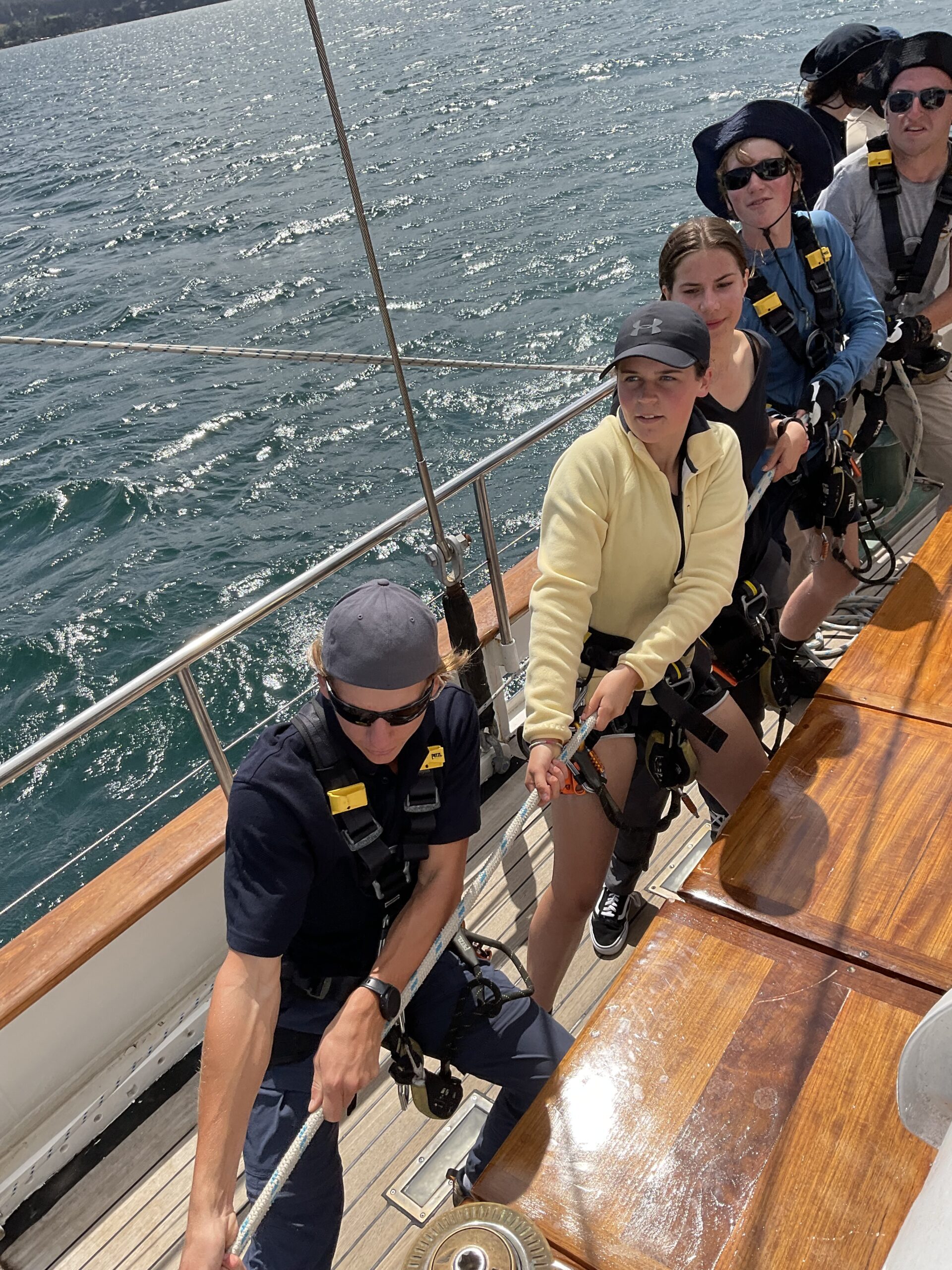 V03/23
Day 3 – Port Davey
Hi Everyone, Welcome to Day 3 of our voyage. It’s been an action packed day with plenty of activities and a chance to climb a mountain and admire some spectacular scenery in the beautiful Port Davey which would have to be one of the most remote parts of our wonderful country and a place that we on board Young Endeavour feel privileged to visit. That’s enough from me I will now handover to youthies Summer and Tiff who have done a wonderful job of writing tonight’s Log. Until tomorrow, take care. Captain Gav   Ahoy there from Summer and Tiff, Day 3 starts off in the early hours of the morning where night watches commenced for the first time on the voyage. As advised, the Youthies take their sea sick tablets for the busy and exciting watch ahead, but the excitement was short lived for some of our Youthies. Paper bags and the open ocean became almost everyone’s best friend, with stomachs turning, even with the help of the sayo biscuits to try and keep it down, we all raced to a spot on the side of the ship to throw up. Red watch started at 23:45, making our way from Quarantine Bay through the rough seas aiming to complete over 110 nautical miles to get to our anchorage for the night. Within five minutes of the watch, heads were out the side of the boat with Matty and Evan telling us to clip our harnesses on the railing so we don’t fall in, and to be honest with you all, all we were concentrating on was not to throw up which was proven difficult. After watch was up, it was a very quiet breakfast as most of us Youthies were sleeping. Once almost everyone was awake, the morning briefing was called where we completed our first rope races, where of course, red watch won. The rope races finished and the not so happy, Happy Hour began where us Youthies cleaned up the lower deck, well, tried too. The constant swaying of the ship began to arise the Youthies from the lower deck up to Mid Ships where designated spots for throwing up awaited us. At 13:00 we arrived at Port Davey in much calmer seas where we anchored. A short briefing was held and we were advised that we were to be taken into shore for the first time on this voyage. Salty sea puppies, turned into tree huggers once we arrived to shore. A quick game of red light green light was played, conducted by Chucky while we were waiting for the other youthies to arrive from the ship to shore. As everyone decided we all wanted to go for a hike, we made our way up Milner Mountain where we took in the breathtaking scenery from the top and took some happy snaps for well-made memories. Once we recovered from the hike, we all went into the water up to our knees and we then made our way back to the ship where Haydo, Hoppy and Captain Gav had cooked up a storm on the BBQ. With everyone’s stuffed bellies, anchor briefs were mentioned and the 3 way chats got everyone laughing to end the night off for activities, still with anchor watches throughout the night. And a special mention to Shaun, as he said we have to put his name in so we get chocolate. Shoutout to Mum, Dad, Tyler, Lachie and fam, as well as Mum, Garry, Brandi, Curtis and fam, we both miss you a lot. Fair winds and following seas, Summer and Tiff
Read More 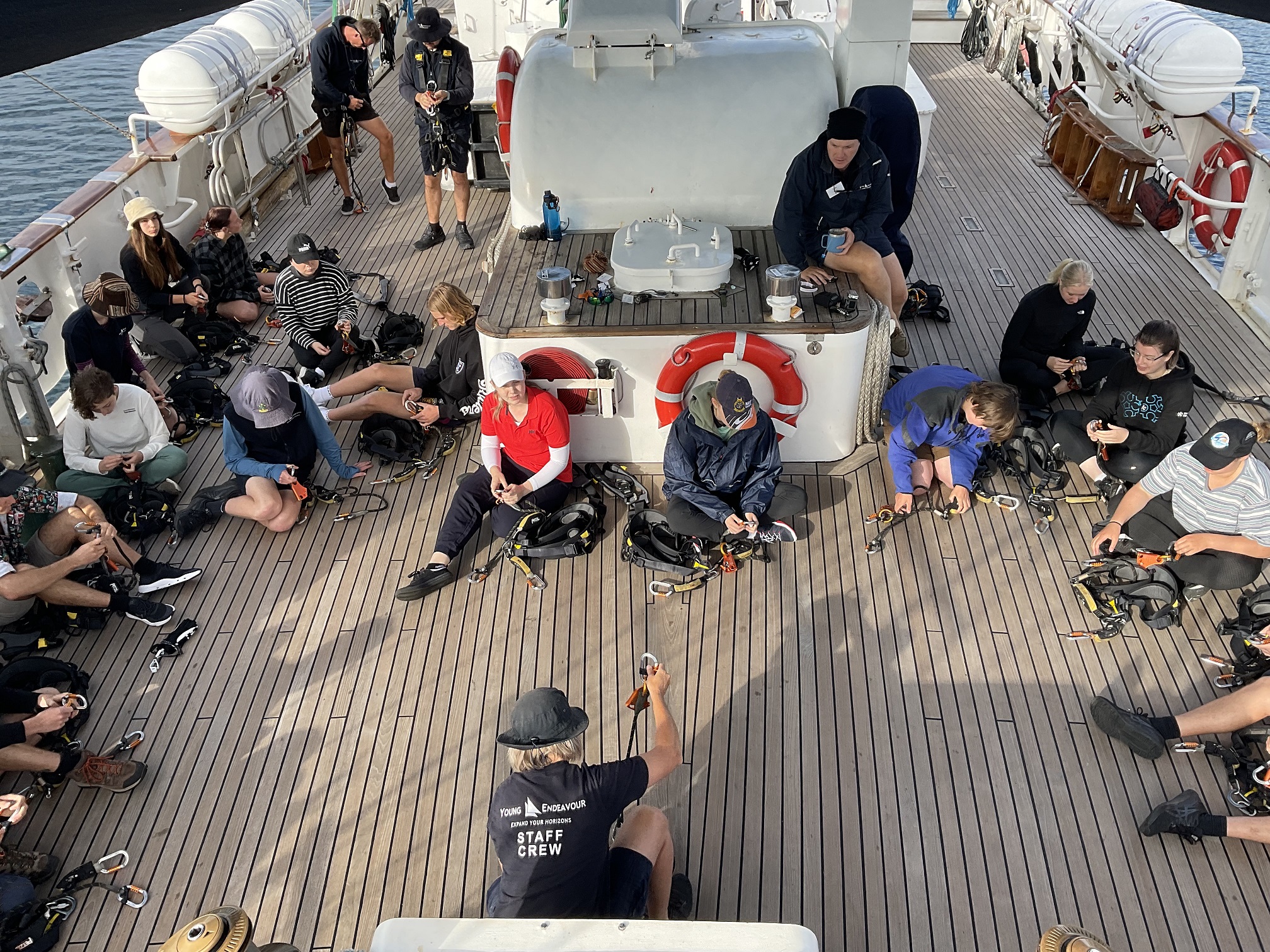 Hi Everyone,                       Welcome to Day 2 of our voyage. After a good night’s sleep the the Young Endeavour Crew woke to an overcast but fine morning in the beautiful Quarantine Bay. Following an Early Morning Activity (EMA) at 0630, Big Breakfast then Morning Brief the Youth Crew were mustered on deck where they were given a comprehensive harness and climbing brief before all of them successfully climbed to the topgallant yard which is our highest yard on the foremast which was a fantastic effort by all. At 1330 we departed our anchorage then commenced our transit south through the picturesque D’Entrecasteaux Channel. During this transit the Youth Crew spent time with their Watch Leaders practicing setting and furling of sails and learning what the many sheets, tacks, halyards and many other lines/ropes on board Young Endeavour do. Once proficient with their sail work the ship was brought under fore and aft sail and we completed our first set of tacks as a crew which went extremely well. On completion of the last tack we reduced sail and then proceeded below to enjoy another one of Chef Haydo’s fantastic dinners. With our stomachs full, everyone again mustered back on deck for Teresa’s Safety Equipment Brief which was the final activity for the day. The time is now 2045 and we are just departing the D’Entrecasteaux Channel. Overnight the Youth Crew will settle into their watch routine as we round Southeast Cape and continue to make good speed to Port Davey which is planned to be our next anchorage.   Until tomorrow, take care   Captain Gav 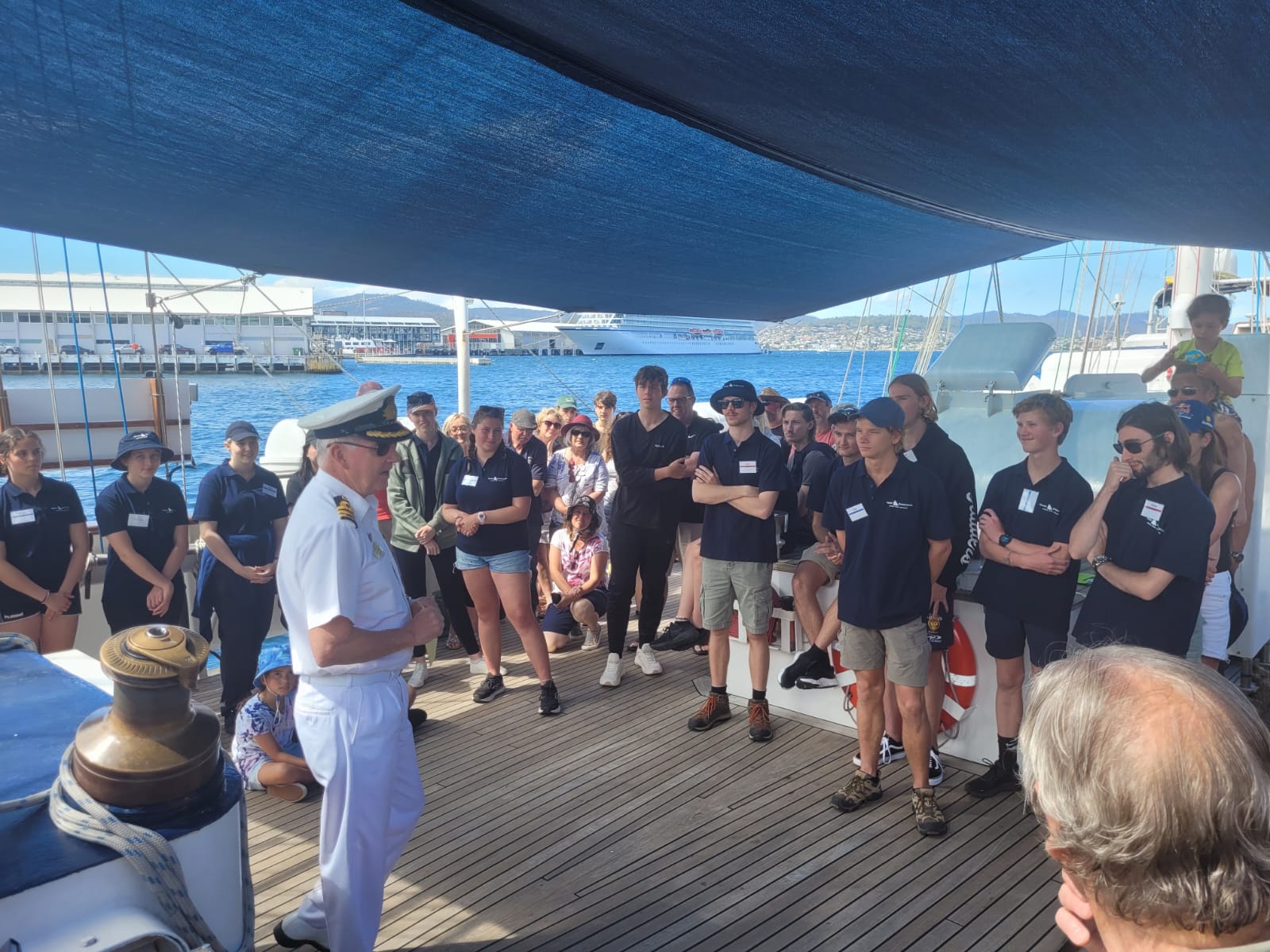 Hi Everyone, It’s Captain Gav making a guest appearance back on board Young Endeavour for her third voyage of the year. This voyage will see us sail from Hobart to Hobart which will give us 10 day’s to explore some of Tasmania’s spectacular coastline and be challenged by some unpredictable weather conditions which is all part of the adventure. We have put together another great Staff Crew for this voyage who I know will take great care of our new Youth Crew ensuring that they all have an amazing experience. The Young Endeavour Staff Crew for this voyage are as follows: Captain –  Gav Sail Masters – Chucky & Libby Navigator –  Seb Watch Officer -  Matt Blue Watch Leader –  Shaun & Hutchy White Watch Leader – Theresa Red Watch Leader –  Evan & Emily Chef – Haydo Engineer –Hoppy The voyage commenced at 1500 today when the new Youth Crew joined Young Endeavour berthed alongside Hobarts Princess Wharf. Once we had everyone on board and gear stowed, we mustered on deck for my welcome address followed by Staff Crew introductions. On completion we farewelled a large gathering of family and friends then got straight into a safety brief. Our departure was then slightly delayed due to having to wait for a large cruise liner to depart her berth but at 1640 we cast off lines and departed Princess Wharf. Once safely out in Sullivan’s Cove we were joined by the SV Rhona H who escorted us out into the Derwent River then we commenced our 3hr pilotage down the River and into the D’Entrecasteaux Channel coming safely to anchor at Bruny Islands picturesque Quarantine Bay at 1940. During this pilotage the Youth Crew were given ship’s tours and enjoyed a fantastic dinner consisting of Chicken Kiev, Grilled Salmon, Pasta Bake with numerous Vegetables and Fresh Fruit and Mini Pavlova’s for desert (what a feast). Once safely at anchor I completed my Captain’s Brief and then handed our new young mariners over to their respective Watch Leaders to undertake some other first day activities before they turn in for a well-deserved good night’s sleep. Before I finish I would like to send a big thank you to Chucky’s Mum & Dad for providing home grown blueberry’s and strawberry’s for tonight’s dinner which were used on our mini pavlova’s and fruit platter and were simply amazing! Tomorrow will be another full day with climbs of the foremast planned for the morning before we weigh anchor and continue our Tasmanian adventure. Until tomorrow, take care.   Yours aye, Captain Gav